Organizing Post-Its with the help of swords

Project
Methods
Duration
Tools
Role
3 months
This is a group work project from the Advanced Immersive Interactions course at Paris Saclay.
I had the luck to work with a experienced VR developer - Petros K. While both of us were involved in any step of the project we decided to play on our strenghts. I was in charge of organising the ideation Petros took charge during the implementation.

Organizing Post-Its with the help of swords

Show Project Details
Project
Methods
Duration
Tools
Role
3 months
This is a group work project from the Advanced Immersive Interactions course at Paris Saclay.
I had the luck to work with a experienced VR developer - Petros K. While both of us were involved in any step of the project we decided to play on our strenghts. I was in charge of organising the ideation Petros took charge during the implementation.

The course project was about coming up with exciting interaction methods for a random task. The task Petros and I settled on is "Clustering Post-Its". We wanted to come up with a fun instrument/tool to sort and label Post-Its.

To my surprise, Petros has never worked with Post-Its before. I wanted him to get a feel for the task of clustering Post-Its, so we did a mock brainstorming. We imagined opening a student cafe on campus and writing down all our ideas for it. After that, we clustered the ideas to get an overview of what was important to us. 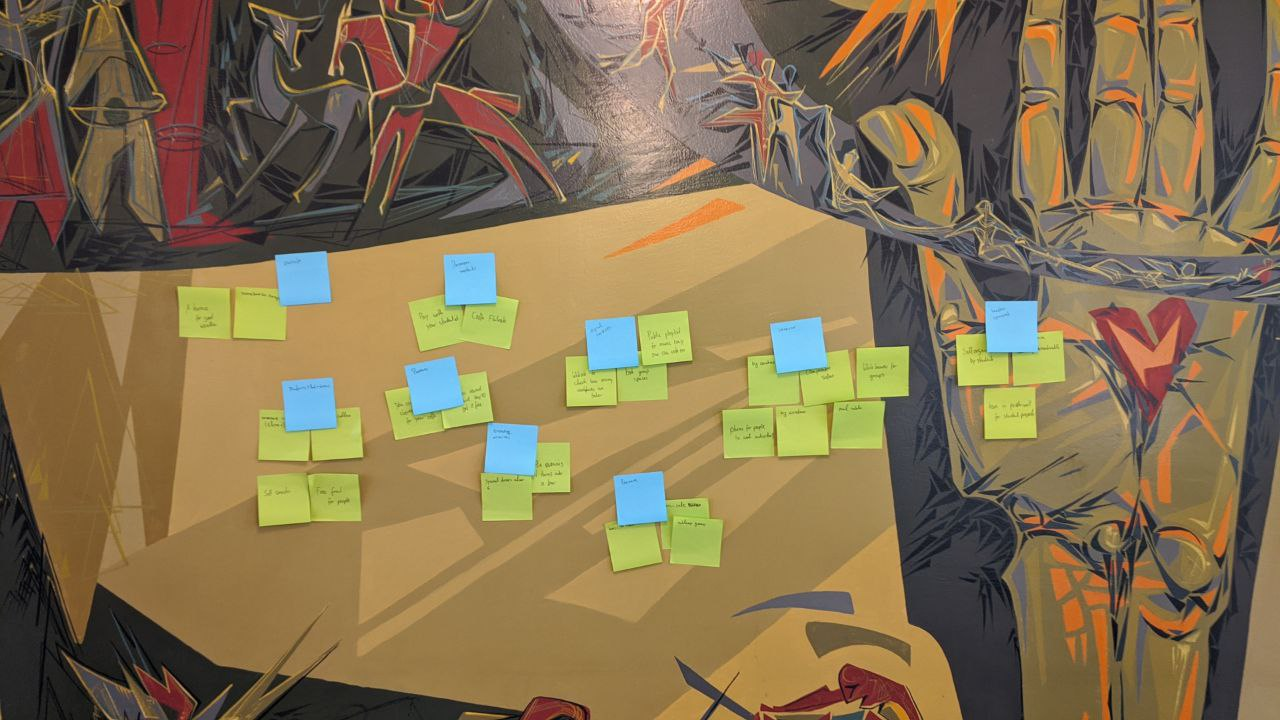 It was a fun task that also helped us to get to know each other a little more. After that, we analysed the technique we had just used. This is supposed to help us understand the problem space we are working in and help us come up with new ideas during ideation. 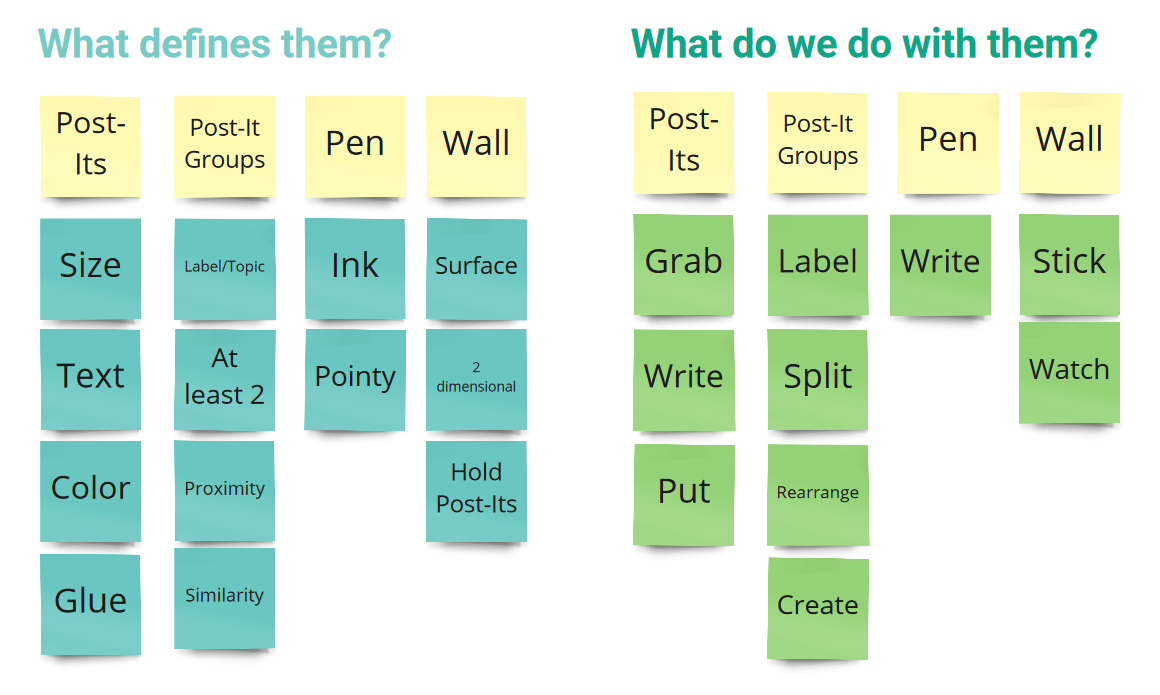 Overview of our problem-space: What are we working with?

press for fullscreen

Next, we ideated on different objects we could use for the clustering of post-its. Again we used Post-Its to write down any random objects that come to mind. After that, we took turns picking an object and pitched to the other how the object could be used to cluster Post-Its. It was a close race between using a vacuum to suck in Post-Its and using a sword to stab them. We settled on the sword.

There were a few basic things we decided early on to make our life a little easier. Each sword will represent a group; the user can add post-its by stabbing it with the sword. The user can name swords. The swords name represents the label for the group. The clustered and not clustered Post-Its will be separated from each other to avoid complexity. Designing a VR scene was not trivial for us. The switch from the familiar 2D interface to 3D caused confusion. To overcome ambiguity in how we imagine our 3D scene, we sketched them. To present and test interactions, we reenacted them with sticks. 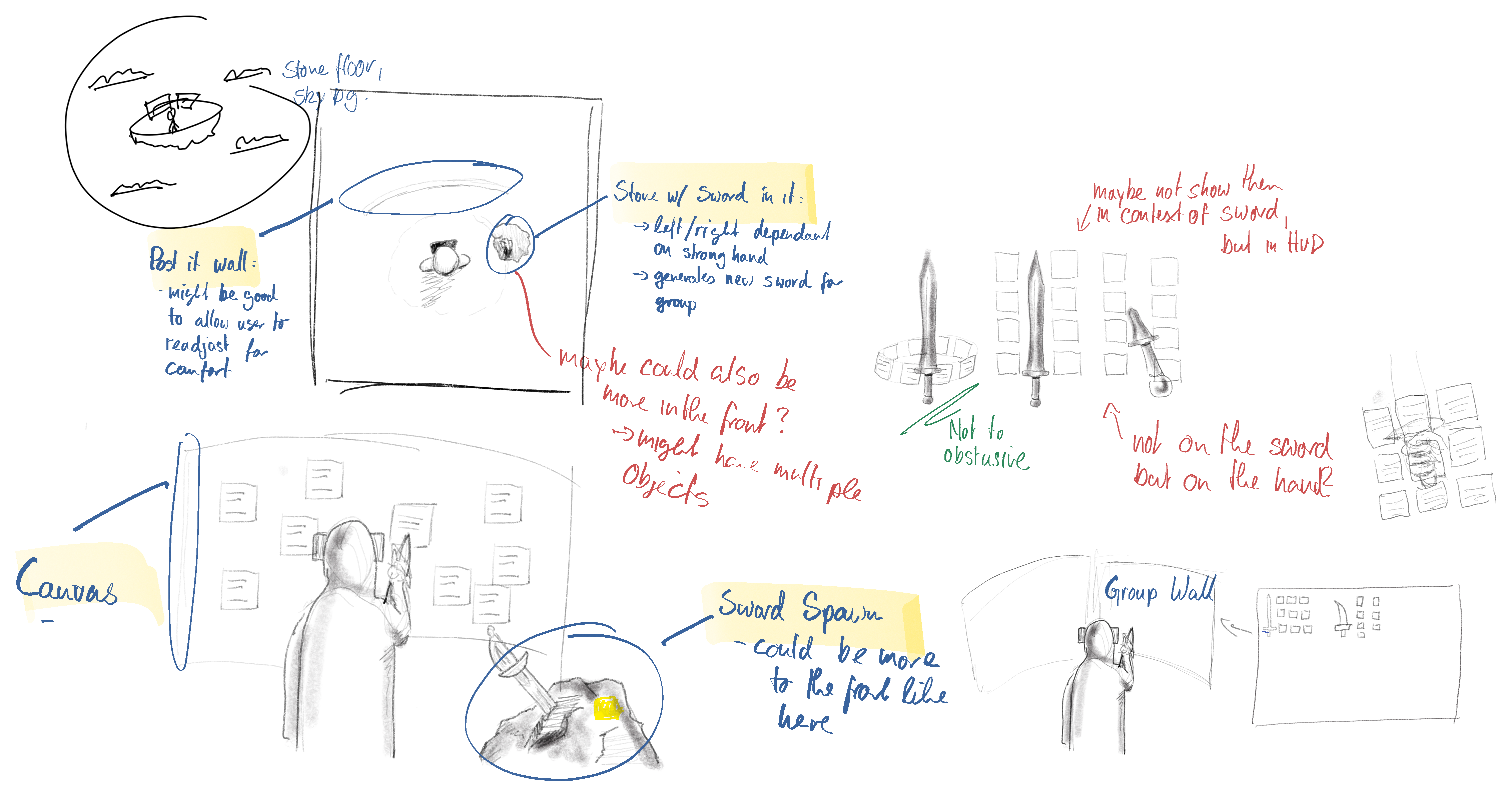 Some of the sketches for our VR scene

press for fullscreen

So this is what we came up with:

Both Petros and I own an Oculus Quest, so we developed with them and with the help of Unity. During the development and while trying the application, we learned about some problems. Initially, we had a rectangle where each group of Post-Its is displayed. The sword lies there like in an exhibit. But that way, it was hard to grab. And the layout of the Post-Its took too much space. After more than three groups, the user had to walk around to see all groups and grab their sword. We reduced the area the groups take and put the sword in a more comfortable and intuitive position to grab.

Naming the swords was not as intuitive enough as we imagined. We added vibrations in the controller, a visual effect, and recorded a message asking what the group should be called to make it more straightforward. 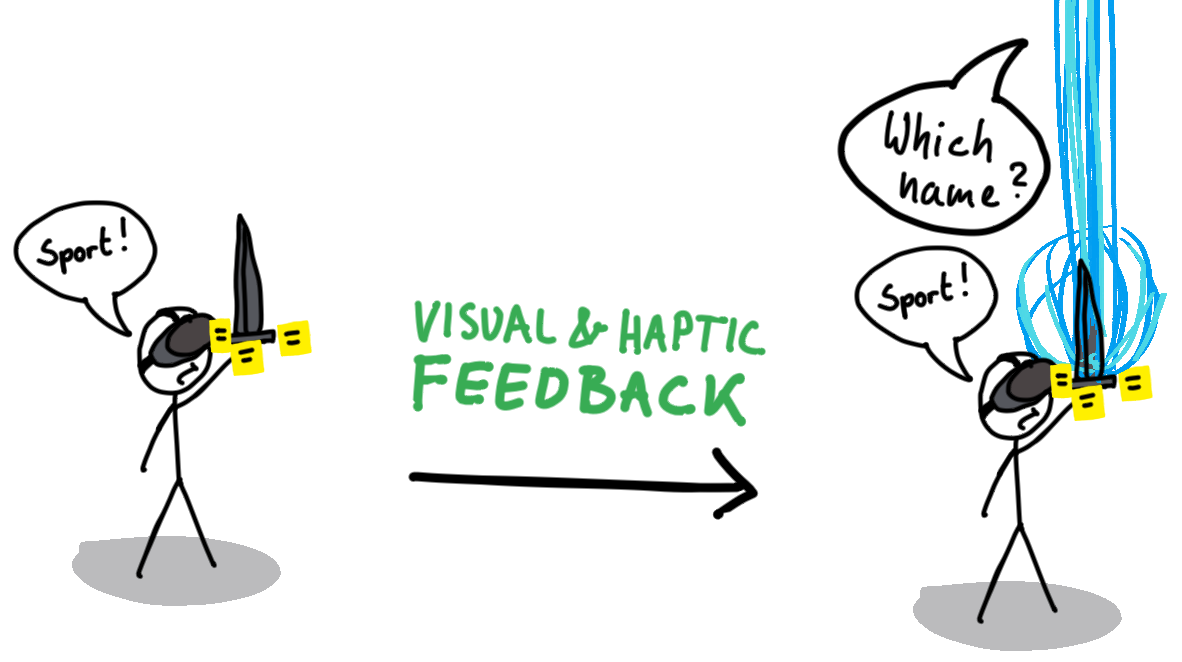 The following video is the demo we presented to the class. Unfortunatly Oculus did not record the microphone, and you can't hear me naming the groups.

For a 3 month course project we came pretty far. If this would be developed further, however, some limitations would need to be adressed. The speech to text did not work well, and our concept does not scale well - The prototype could not handle more than 8 individual groups.

Thank you for taking the time
to read about my project!
🖖